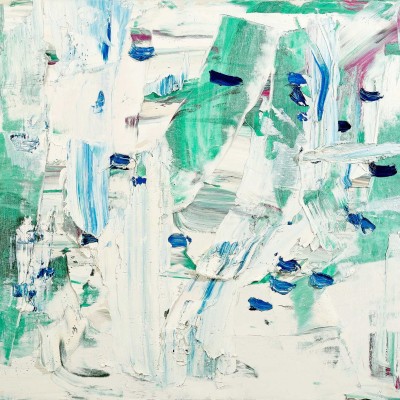 Snow in the Summer

As a factory worker in the 1970’s, Zhu Jinshi studied after-hours with an older artist, Li Zongjin, who had been trained in Western oil painting before the Anti-Rightist crackdown in the 1950’s. Zhu borrowed a book on Kandinsky and was transformed.

Zhu was part of the first influential avant-garde group of artists after the Cultural Revolution, the “Stars Group” (Xing Xing), who challenged both aesthetic convention and political authority. The Stars’ use of formerly banned Western styles from Post-Impressionism to Abstract Expressionism was an implicit criticism of the status quo. In 1985, Robert Rauschenberg exhibited a retrospective of his work in the National Gallery and traveled to Beijing to lecture and meet artists. Zhu recalls having a heated debate with Rauschenberg. Zhu attempted to explan that the theoretical bases of
Abstract Expressionism, such as gesture and the expressive nature of the brush, were not new, and actually had been part of Chinese aesthetic theory for centuries.

Zhu left for Berlin in 1986, a full three years before the fall of the Iron Curtain. Zhu stopped painting for a short time, instead immersing himself in the study of Joseph Beuys, the German performance artist and theorist who championed the power of universal human creativity. During his stay in Europe, Zhu was also greatly influenced by German New Expressionism. His paintings became thicker and more impasto, expressive abstracts. In 1994, he returned to Beijing and began traveling back and forth each year, as he does today.