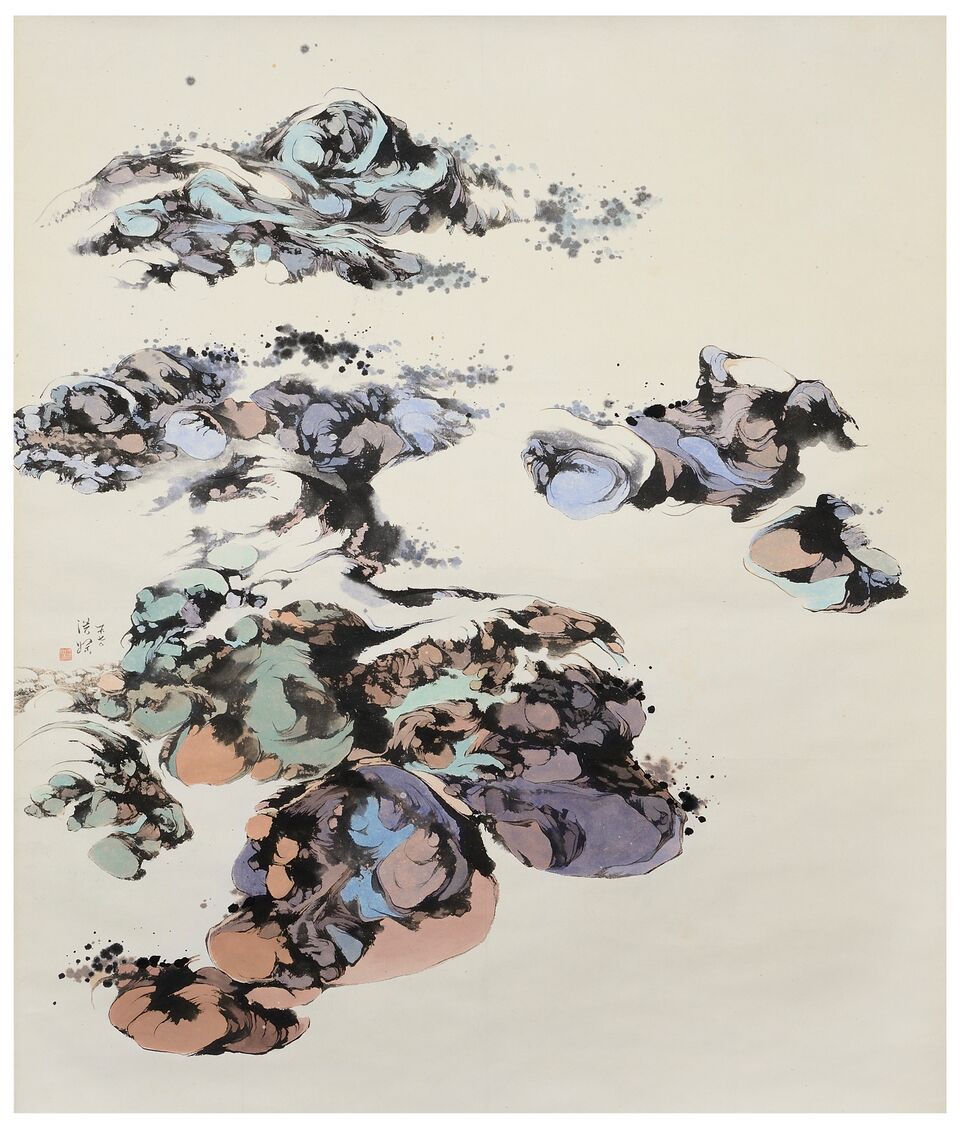 Hung Hsien is the most intriguing artist I’ve shown in the fifteen years of M. Sutherland Fine Arts. With Hung’s exhibition during Asia Week 2016, it is my hope that the art world will take notice and recognize her singular position in the pantheon of modern Chinese painting.

I first met Hung Hsien when I was a graduate student in Lawrence, Kansas, in the late Seventies.  I was astonished by the fantastic forms in her pictures, her striking pastel palette, and the abstract tension of the compositions. The paintings left an indelible impression. In all my years of looking at contemporary Chinese painting while living in Taiwan, Beijing and Hong Kong, I have never seen anything else like this.

The pictures in this exhibition are clearly modernist, but delivered with the brush skills of a classical ink painter. They are “landscapes” but have more affinity to “mod” designs of the Swinging Sixties (think Lava Lamps and Pucci scarves) than the gong bi  (fine line style) bird and flower paintings of Hung’s famed teacher, Prince Pu Hsinyu.

As a teenager in Taipei during the early 1950s, Hung took private painting lessons from Prince Pu Hsinyu, a survivor of the Qing Imperial household, who, to this day, is regarded as one of the great 20th Century Chinese painters. Hung recently explained, “Pu Hsinyu was very old fashioned in his teaching style.  I would be given one of his compositions to copy over and over again, stroke by stroke to perfect the techniques.  Each week, I would bring my homework to him for a formal critique. I studied with him in this manner for years.”

Hung Hsien ultimately took a completely different path, separate from Pu’s other students.  As an art student and teacher in the Chicago area during the late 1950s through the 1970s, Hung was exposed to Abstract Expressionism, which profoundly changed her painting style.  She became unafraid to experiment with abstraction and allowed the traditional rock and water forms to become simply a point of departure for her expressive brush.  Mary Lawson, a University of Chicago-trained art historian, wrote that Hung Hsien’s mature works embodied “the implication of the eternal flow of nature rather than the reality of identifiable forms and texture.”

In “Ocean Rocks” (1970), the only hint of the subject is revealed in the title.  The painting’s strength emerges from the rich coloration and rhythmic brushstroke along with the “inner light” emanating from the compositional push/pull between form and void.  There is a connection to the abstracted landscapes of Shi Tao of 17th Century Yangzhou (Hung’s hometown) but also to modern 20th Century American painters such as Arshile Gorky and Mark Tobey.

Yet, without the years of discipline under Prince Pu Hsinyu’s tutelage, Hung would never have had the technical skill—and confidence—to break free of the limits of traditional ink painting. What other student of Prince Pu can boast of belonging to these subsets of influence?  And similarly, what other Abstract Expressionist can claim the technical rigor of training by Prince Pu? It is an understatement to say that Hung’s creative vision is unique.

Our Asia Week 2016 exhibition draws from only a portion of Hung Hsien’s personal collection of favorite works.  It is our hope that in the future the gallery will show more selections of Hung Hsien’s unique paintings.  Margaret and her husband, T.C. Chang, will be present during AsiaWeek 2016 Open House Weekend.